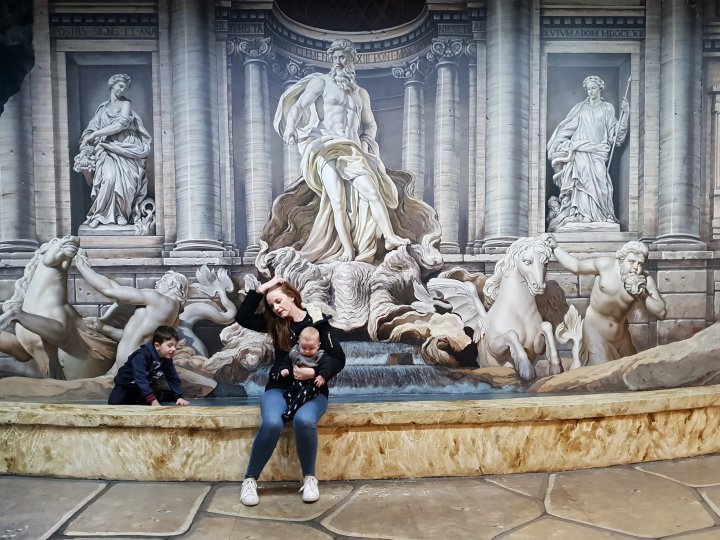 You’re in the local Westfield, rushing around grabbing gifts for the next kindy kids birthday and suddenly when approaching the next shop your 4 year old digs their heels into the ground screaming, “I don’t want to go in, I don’t want to go in!” for what seems like no apparent reason. Your 6 month old is crying because the teething pain and overtiredness has consumed them while you rush to get to that one last store before a cataclysmic tantrum strikes both children, which they so thoughtfully time together. You missed the boat.

You look to your right, a middle aged woman stares at you, shaking her head in disgust, snorting like a pig at how disgracefully you are handling the situation.

Well, mama has been up all night with teething baby. Mama has been sick with stress that all of the work she has put in to helping the 4 year olds behaviour means nothing in that moment. Mama is now so riddled with anxiety she is noticeably shaking (and frazzled) and those awful people-pleasing gremlin thoughts seep out, what devils they are. And what mama doesn’t need is a stranger huffing and puffing at a situation that has zilch effect on stranger’s life.

But alas, strangers be strangely obnoxious and rude and they give no fucks about the fact you got 37 minutes sleep last night.

Well parents, I am here to remind that you too need to give even less fucks about them and give more fucks about your own situation, and about building up other parents going through a shit time too.

A few weeks back I had a clanger of a morning but luckily enough a friend joined me and the kids for brunch at a cafe. Coffee was of the utmost importance. This was at a typically bustling cafe that was full, a third of the patrons had children in tow. We were seated next to two women. 4 year old was not listening to me and was banging toys on the table while I tried to have a conversation with my friend. I handled it immediately. Giving him a single warning that the toy would be put away if he continued and naturally, he continued. I removed the toy while feeding the hungry baby his solids. I heard horrible, snarky comments from the two women various times, sniggering about what I SHOULD be doing. They were sure to be loud enough so I could hear.

Fighting back tears, I decided to take the high road and not say anything to them. I wanted to pick myself up and be strong and set an example to my boys not to reward bullying behaviour with a reaction (even if 4 year old was teating my limits at that time). Because thats what it was, bullying. And for women aged 50 or so to bully a 30 year old woman who was handling her child’s behaviour, not ignoring it by any means, is appalling.

Here lies the grub. As appalling as I felt those women were (they even remarked at a baby girls squeals of delight stating “she had better be dying if she is making that sound”), I did not know their back story. Possibly one of them had a painful headache or an ear problem. Who knows.

All I can say is that I wish they shared a respectful and understanding mentality with me, or had a conversation with me instead. I desperately wanted to rip into them for kicking me while I was down. However I didn’t, because I wanted to display to my children that to behave with such offensive mannerisms to another human being who is trying their hardest, is somewhat inhumane. They did not know my back story as I did not know theirs.

I wanted to give you all a context as to why it is so important to think with an open heart and mind around strangers. Nobody likes that screaming child less than their own parent in the moments they shriek at the top of their lungs. Nobody needs to feel shamed and judged for every decision they make as parent, it is theirs to make and theirs only. Love thy neighbour. Have empathy. And if you feel you aren’t capable of walking a mile in someone elses shoes, then simply walk a mile the other way and don’t use your shoes to kick them in the ribs while they figuratively lie on the ground writhing in pain.

Reach out and offer help to a struggling mum who spilled 50 coins out of her purse at the checkout while she is preventing her toddler from ripping apart the chewy and mints display.

Throw an understanding smile to the first time Dad who is pacing in circles shushing and bouncing the crying newborn while Mum ducks off to the loo at the shopping centre. Sometimes we don’t realise how convincing our resting bitch face can be.

If only we spent more time being helpful to one another rather than constantly finding faults, then maybe we can avoid our children being in such turbulent and disrespectful chaos comparable to what the Australian Parliament has displayed this last week (or decade for that matter).

One way to build yourself up when you are feeling low is to do a good deed, not expecting anything in return. In my experience, positive energy almost always comes back to you. At the very least, you will feel full of hope that your efforts maybe changed someones day.

Search for a topic